Since April 2020 Visual Studio Codespaces has been generally available. In addition to that, GitHub Codespaces has been provided as a private preview. Both are very similar to each other in terms of their usage. There are differences between both, though, discussed from this post. Throughout this post, I'm going to focus on the .NET Core application development.

Visual Studio Codespaces (VS CS) is an online IDE service running on a VM somewhere in Azure. Like Azure DevOps build agents, this VM is provisioned when a VS CS begins and destroyed after the VS CS is closed. With no other configuration, it is provisioned with default values. However, it's not enough for .NET Core application development. Therefore, we might have to add some configurations.

As a Docker container takes care of the dev environment, we should define the Dockerfile. As there's already a pre-configured one, we simply use it. But let's build our opinionated one! There are roughly two parts – Docker container and extensions.

The sample environment can be found at this repository.

First of all, we need to create the .devcontainer directory within the repository. This directory contains Dockerfile, a bash script that the Docker container executes, and devcontainer.json that defines extensions.

As there's an official Docker image for .NET Core SDK, we just use it as a base image. Here's the Dockerfile. The 3.1-bionic tag is for Ubuntu 18.04 LTS (line #1). If you want to use a different Linux distro, choose a different tag.

Now, let's move on for setup.sh.

In the setup.sh, we're going to install several applications:

We now have both Dockerfile and setup.sh for the container setting. It's time to install extensions for VS CS to use for .NET Core application development.

What Else Does devcontainer.json Do?

We've just defined all the extensions in the devcontainer.json file. What else does this file do? It configures overall environments for VS CS to use. It's OK to leave as default, but if you really want to configure, please refer to this official document. Here in this post, I'll pick up a few points.

All the environment setup is done!

Push this .devcontainer directory back to the repository and run GitHub Codespaces. If you've already joined in the GitHub Codespaces Early Access Program, you'll be able to see the menu like below: 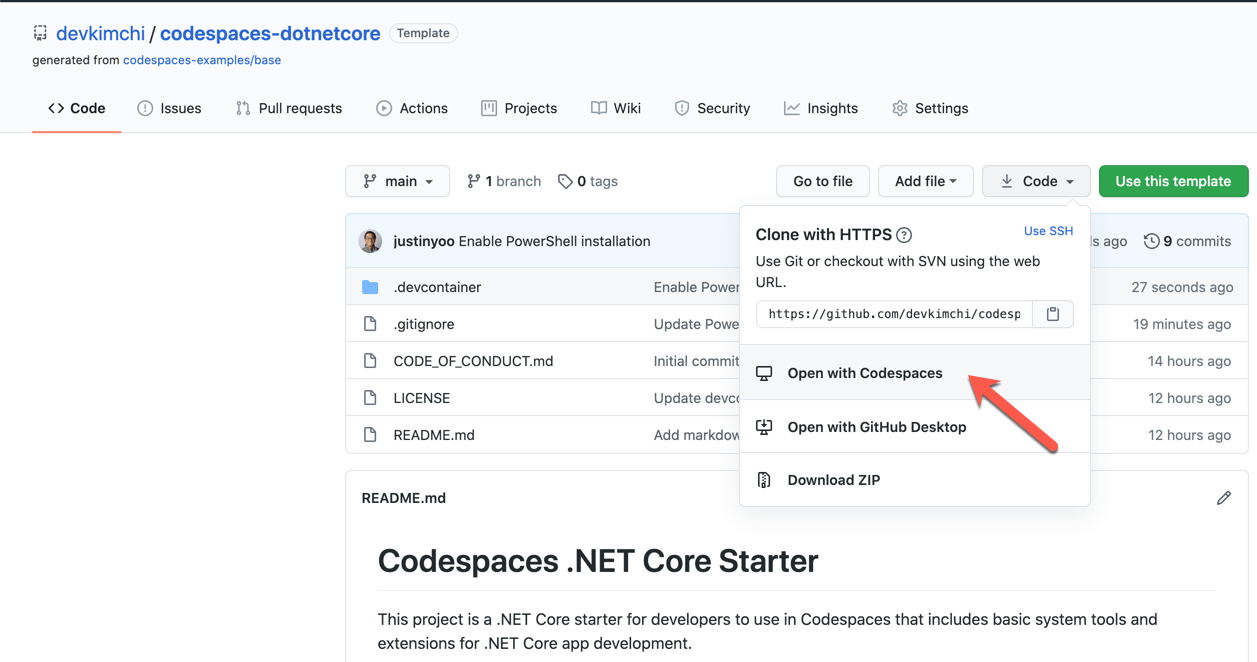 In addition to that, we have both a PowerShell console and zsh console. Run the following command to create a sample .NET Core console app to start writing the code!

This time, run the same repository on VS CS. First of all, visit https://online.visualstudio.com and login.

You MUST have an active Azure subscription to run a VS CS instance. If you don't, create a free account and subscription through this Free Azure account page.

After the login, unless you have a billing plan, you should create it. VS CS takes the consumption-based model, which means that you only have to pay for what you have used. If you don't need it any longer, delete it to avoid the further charge. 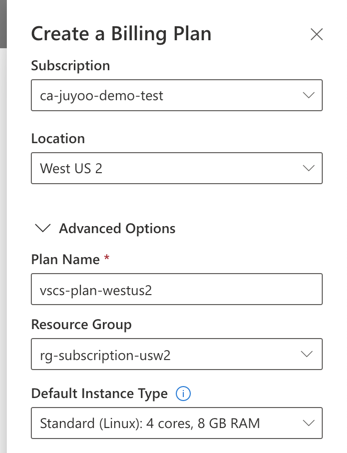 You will be asked to create a new instance if you don't have one yet. 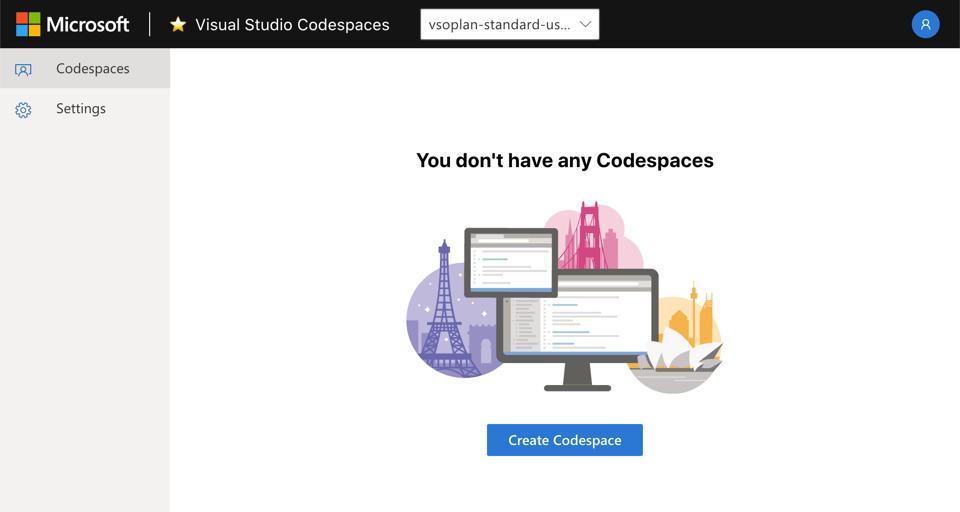 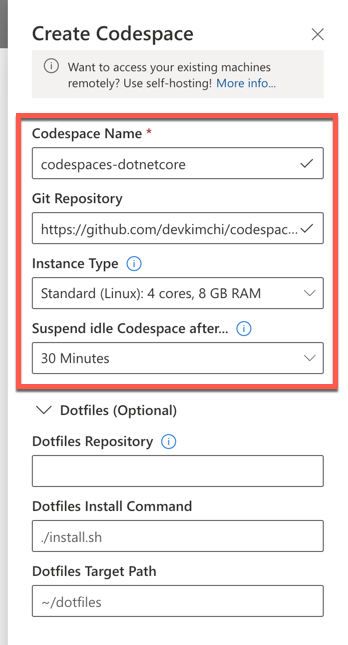 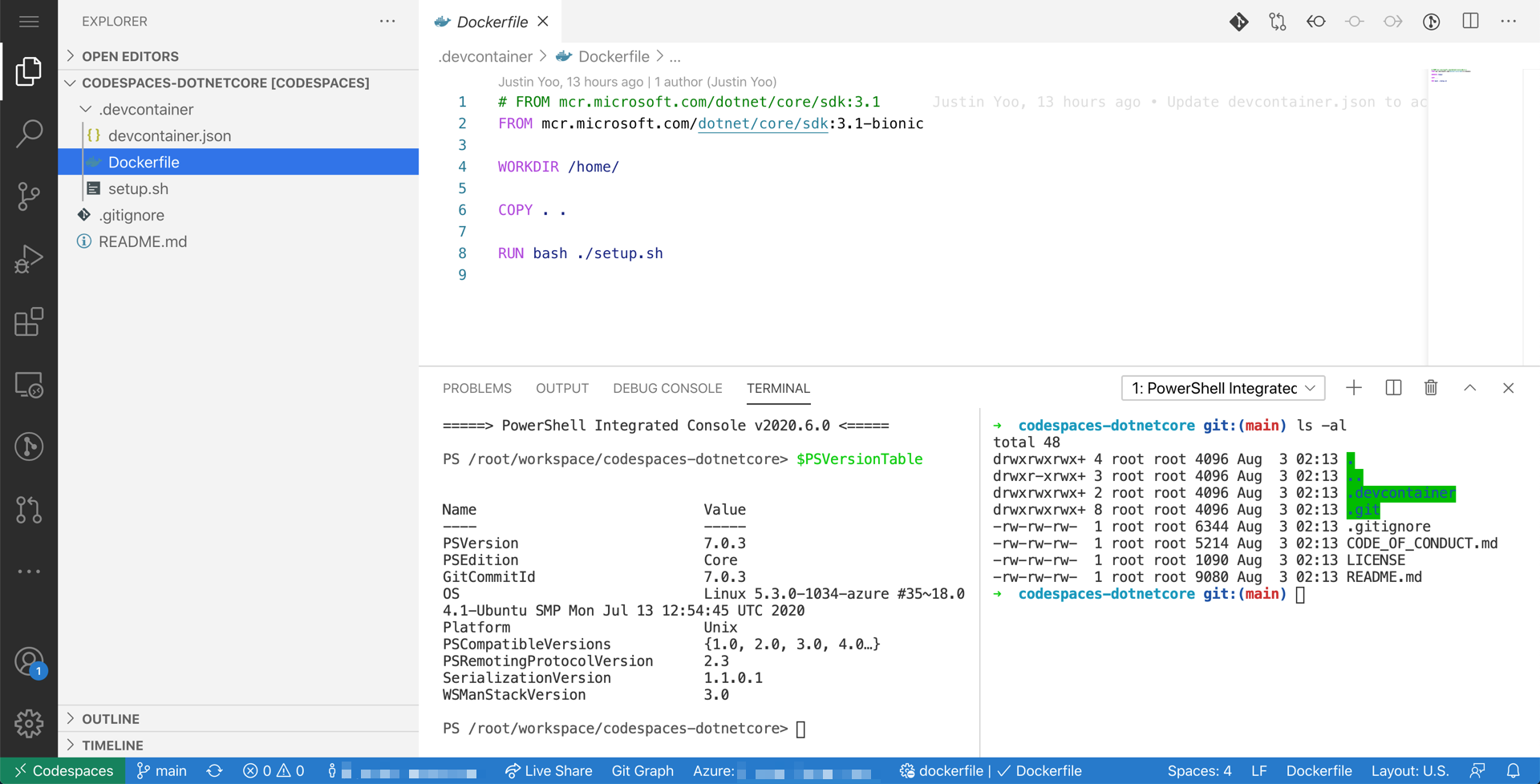 So far, we've walked through how to set up the dev environment in VS CS for .NET Core application development. As this is the starting point of the team project efforts, it will significantly reduce the "It works on my machine" issue.